Software testing is a process that verifies that the software works as expected in test environments. The verification is done through a set of automated or manual steps called test cases.

A test environment is a combination of hardware, software, data, and configuration that’s required to execute test cases. You have to be sure to configure the testing environments to mimic production scenarios. 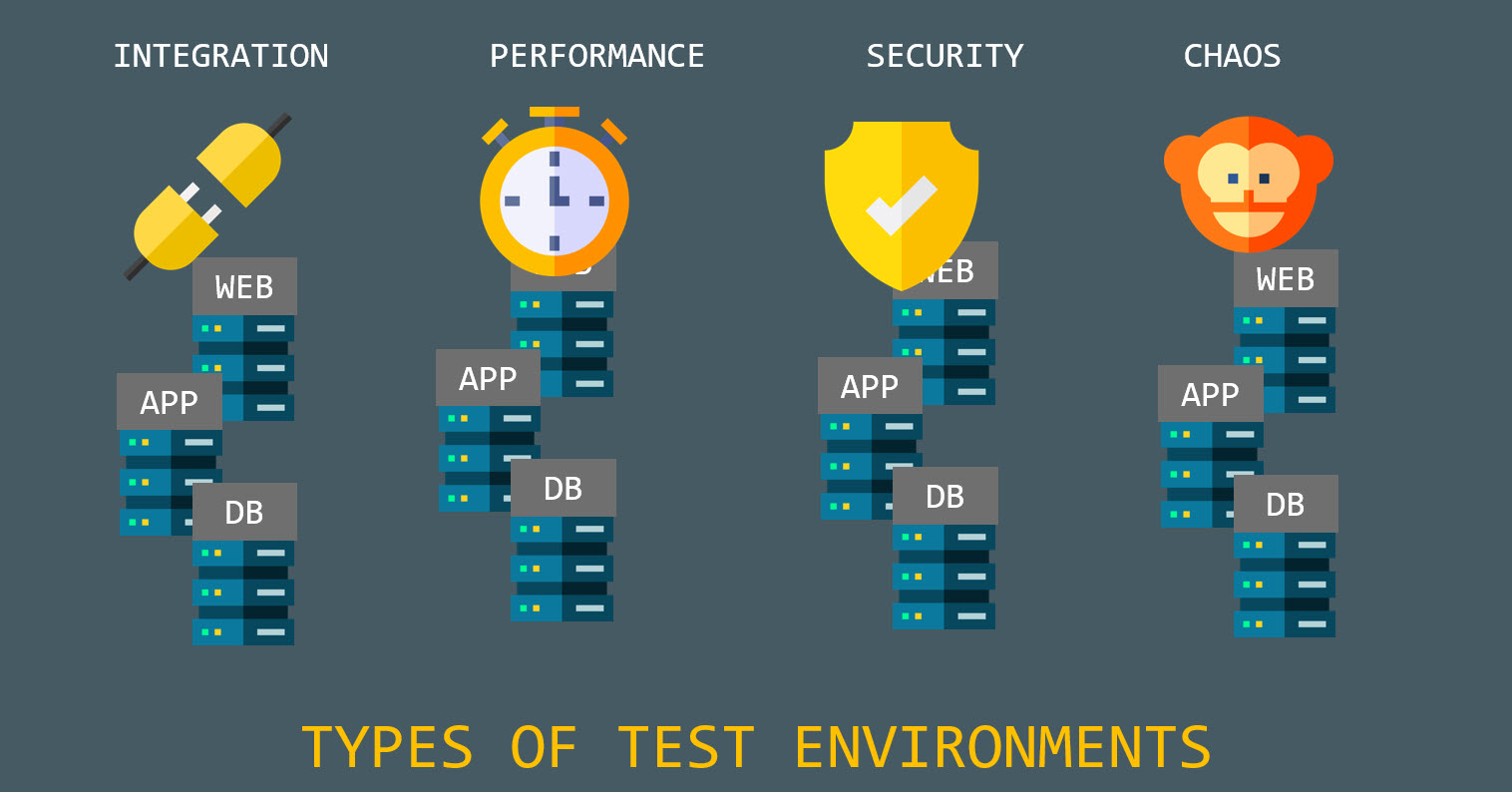 With the modern DevOps approach to software development, where continuous testing is a norm, an integration testing environment will probably be used daily or multiple times a day. Therefore, the ability to recreate the environment at will is paramount to an effective software delivery process.

Performance testing is a very broad term and usually includes volume, load, stress, and breakpoint testing. A good performance testing environment plays a crucial role in benchmarking and identifying bottlenecks in the system.

You’ll then document and publish the results as system benchmarks and compare this with the performance goals of the software.

After that, in a performance testing environment, the software teams take a closer look at the system behavior and related events such as scaling and alerting. From there, they’ll carefully tune them if needed.

Performance tests are usually time-consuming and expensive. Therefore, setting up performance testing environments and running these tests for every change can be counterproductive and is usually not recommended. That’s why software teams only run these performance tests on a per-requirement basis, which could be once a month, for every major release, or whenever there are significant changes in the application.

Let’s now discuss security testing environments. When working with this type of environment, security teams try to ensure that the software doesn’t have security flaws and vulnerabilities in the areas of confidentiality, integrity, authentication, authorization, and non-repudiation.

Organizations usually engage a combination of internal and external (from a different organization) security experts who specialize in identifying security vulnerabilities in software. During this process, it’s crucial to establish a thorough scope that defines exactly which systems will be targeted, which methods will be used, and when the assessment will take place.

As part of a good security testing environment setup procedure, you’ll want to establish some ground rules, such as

This is especially applicable when engaging external security companies.

Different parts of security tests can happen at different frequencies and different stages of the software delivery process. A successful software team usually executes vulnerability assessments, scans, audits, and any other non-invasive tests more frequently when compared to invasive tests like penetration tests. Automating security tests that are non-invasive and running them as often as possible, perhaps alongside integration tests, helps maintain a security baseline.

On the other hand, executing advanced invasive tests requires a good understanding of the software and the potential attack surfaces. Carrying out sophisticated attacks on the software by penetration testing requires the expertise of the security specialists. This is not something that you can easily automate, and it requires a lot of effort. Therefore, you’ll run these tests less frequently.

According to the book Chaos Engineering, “Chaos engineering is the discipline of experimenting on a system to build confidence in the system’s capability to withstand turbulent conditions in production.”

Understanding how the failures of individual parts of the system can potentially cascade and ruin the whole system is the ultimate goal of chaos testing. By using fault injection techniques, software teams build an in-depth understanding of critical dependencies of their system and how software fails.

With that definition in mind, let’s talk about the final environment on our list: the chaos testing environment.

If you have a modern web application with a microservice architecture, where different independent services make up the application, then setting up a reliable chaos testing environment is crucial. These environments must be set up in the same way as your production environments are, and they must be configured for scale and high availability.

Having an environment to test the high-availability, disaster recovery, and business continuity provisions configured in each service crucial to improving the reliability of your whole system. It’s equally important to test how the dependent services behave in these failure modes. Disaster recovery drills or game days are excellent opportunities to run these tests and identify the potential weak links in modern, large-scale applications. Software teams usually run the chaos experiments less frequently and mostly alongside the performance tests.

Test environment management is a crucial aspect of the software delivery process. Incorrect environment setup leads to inconsistent test results. This leads to friction and blame among the stakeholders, who ultimately lose confidence in the test results.

This post described the commonly used test environments and things to consider when setting up and managing them. The ability to spin up testing environments on demand is crucial to successfully managing your test environments. You can read more on this topic in our post called “Are you TEM Savvy,” which is an excellent piece full of useful tips on managing reliable and consistent test environments.

This post was written by Gurucharan Subramani. Gurucharan is a software engineer who likes to get .NET, Azure, and Azure DevOps to not just meet but to also dance. Some days, Guru is a dev; other days, he's ops. And he's frequently many things in between. He's a community advocate who leads the Bangalore Azure User Group and is a member of the .NET Foundation.